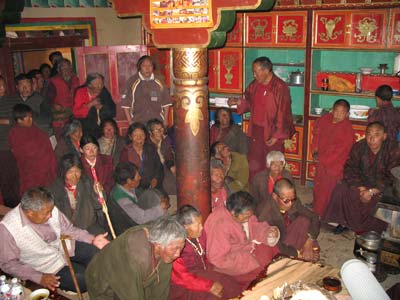 This project addresses a precarious situation in the Amdo and Kham regions, situated in Eastern Tibet on the border with China. The Amdo area is his holiness the Dalaï Lama’s native home.

In these rural regions, health care hardly exists and lack of medical assistance and basic hygiene structures make the situation even worse. The government does not take care of the basic needs of local populations and the only clinics are monastic ones. The nuns from the local monasteries live in very difficult conditions. Assistance in health training and access to medicine (Tibetan and Western) are crucial to ensure that they can provide sanitary services to the population.

The nuns also practice the art of Tibetan yoga, the Toumo, which, through body adaptation to the cold, allows the body to strengthen its defences against illnesses. The assistance provided by this project will allow the nuns to teach Toumo to locals, thereby increasing the impact of health assistance and access to medicine.

The first phase of the project was put into action during a trip to Dechen Ling in the Nangchen area, in September 2006. Five monasteries were visited and the accomplishments of the trip were encouraging. We managed to train 2 nuns or monks as health care workers in each monastery. The training included basic diagnosis and treatment of common, uncomplicated medical problems. It was decided to expand training in the future. We also provided Tibetan and Western medicines and medical supplies for one year and investigated the possibility of establishing clinics in each monastery. In addition, we gave financial aid to elderly and poor people.

In September 2007 the second yearly medical trip was undertaken by Ted Wordcester and Yangdzom Healing Hands team. It far exceeded all expectations for success and achievement. This time 9 monasteries and nunneries were visited and candidates in each were chosen for a 3 month medical worker training program, in Jyeku in 2008. Clinic building in the monasteries was checked and deemed to be progressing satisfactorily. Once again we gave money for a year’s worth of medicine, funds to the poor and elderly, additional Western medicine as well as distributed reading glasses to old monks, nuns and lay people.

Each monastery welcomed our work with enthusiasm. This project is greatly appreciated and we have been asked not to abandon it. Unfortunately, for the time being, the political situation in Tibet does not allow us to continue the work.