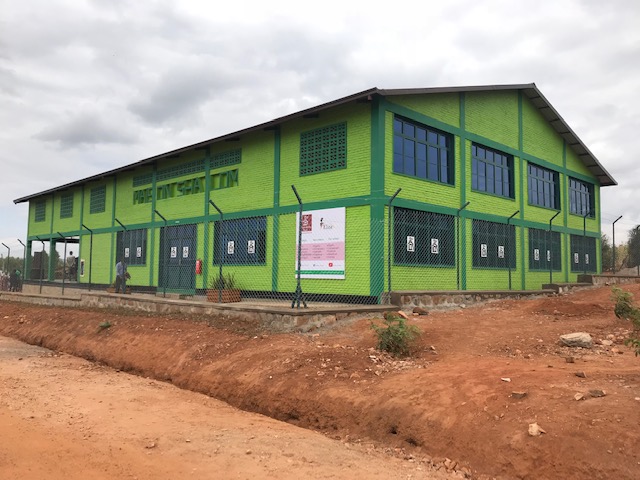 On June 22nd 2018, Graziella Zanoletti and Brigitte Burgisser inaugurated the « Mahama Elite Center ». The Center and its activities will be supervised by our partner « Maison Shalom » and its charismatic founder and president Marguerite Barankitse, known internationally as the mother of 10,000 children saved during the civil war in Burundi.

For many years, Friends of Humanity has been supporting the international NGO Maison Shalom, whom supports refugees to develop practical skills through vocational trainings with the purpose of empowering them to become self-reliant.

Since the end of April 2015, Burundi has been shaken by a major political and security crisis, terrorizing the civilian population every day. This situation has caused a large movement of refugees to neighbouring countries, particularly Rwanda, Tanzania and the DRC. As of July 2017, there are 68.000 Burundian refugees in Rwanda (60.000 at Mahama refugee camp), 392.000 refugees in total in the whole region and, among them, a very large number of them are young people.

Some young people are already involved in delinquency in several forms: excessive consumption of alcohol, drug abuse or prostitution among others. Left to themselves with all these problems, these young people could try to join armed groups. This would further deteriorate the security situation in Burundi which is already tense, with consequences for the whole region.

To improve these difficult conditions, in June 2018, Maison Shalom and Friends of Humanity opened, at the Mahama refugee camp in Rwanda (with more than 60.000 Burundian refugees), a center called “Mahama Elite Centre”. The aim of this center is to foster socio-cultural development of Burundian refugees, with courses including English learning, culinary arts, tailoring, embroidery and painting among others.

The foundation stone of the workshop was laid on January 3rd 2018, but only 98 days after the actual beginning of the construction works, during which numerous men and women refugees of all ages worked together as a team (getting an income for their work that helped them to improve their living conditions). On June 22nd 2018 the Centre was opened and operational.

A month after the inauguration of the Elite Centre at Mahama refugee camp in June 2018, several activities and trainings had already started:

The Mahama Elite Center has become not only a learning and training center, but also a place of hope, joy, and healing for residents of the camp.

« This Center do not only have a unique positive energy hardly seen in a refugee camp, but above all it is an exemplary project of refugee management, assistance and solidarity that needs to be replicated in as many refugee camps as possible in the world. »

According to Paul Kenya, UNHCR Field Officer at Mahama camp